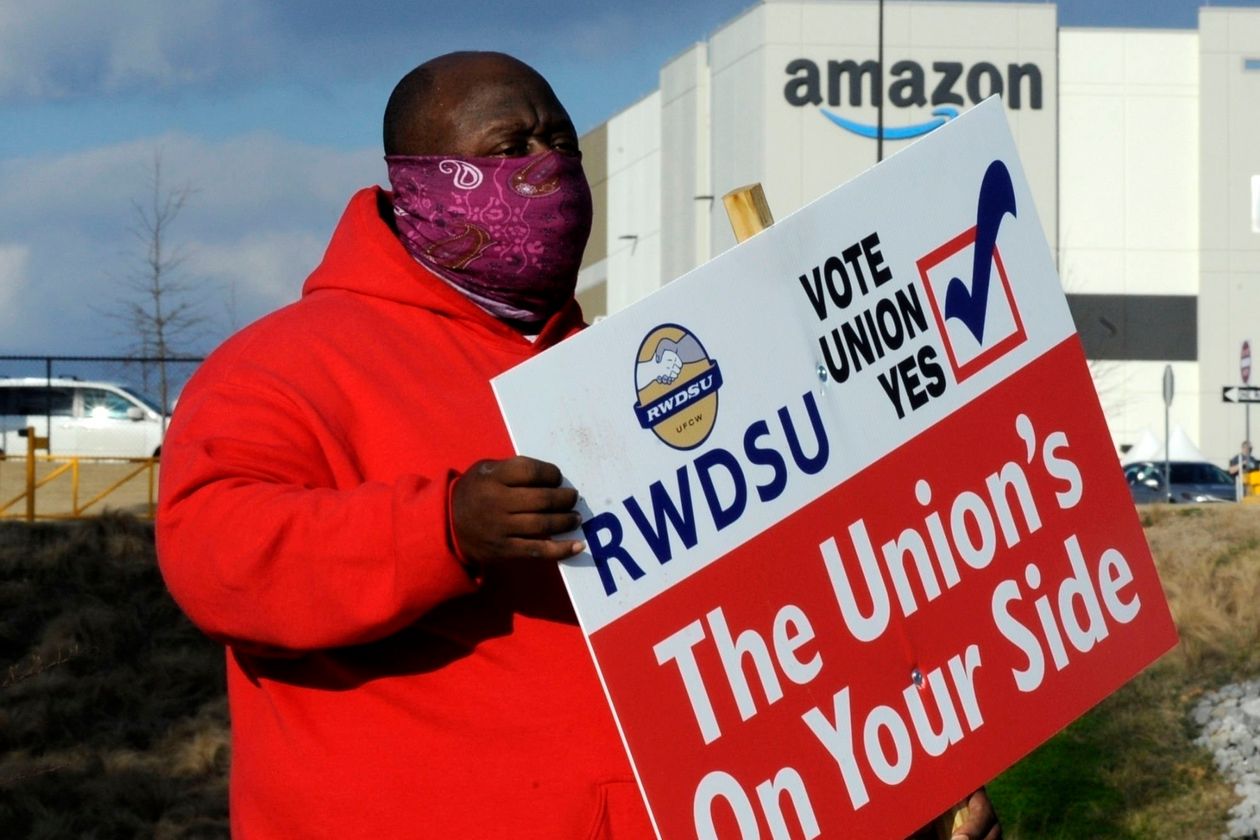 Amazon . com Inc. warehouse workers in Alabama are voting on whether to unionize this month. Whatever the result, the e-commerce giant faces pressure from staff world-wide to make changes to its working conditions.

So far those actions stop short of a formal unionization push, but each one involves hundreds of employees and shows how work conditions at Amazon warehouses are increasingly in the spotlight. President Biden and other high-profile figures have weighed in on the Bessemer, Ala., vote among warehouse employees. Sen. Bernie Sanders, a frequent Amazon critic, is scheduled to travel to Alabama Friday to meet with Amazon workers, a spokesman said. Thousands of votes have already been submitted in the mail-in election, which concludes March 29.

None of Amazon's 800,000 U.S. employees are unionized. A vote to form a union in Alabama would give workers more power to negotiate with the company on matters such as pay and benefits.

Elsewhere, hourly Amazon employees are gathering petition signatures, discussing potential strikes and consulting with unions about possible demands. The groups are seeking to alter company policies on the rate at which they must prepare packages as well as break time and shift schedules-all factors that can make Amazon a physically demanding place to work, workers say. Such issues have risen to the fore for many employees amid Amazon's expansion and push to speed up delivery times.

"It would be a victory for us, and it would bring momentum for others," Jennifer Bates, a worker-organizer in Bessemer, said in an interview. "It would be a fire starter."

An Amazon spokeswoman said the company "already offers what unions are requesting for employees: industryleading pay, comprehensive benefits and opportunities for career growth."

Employee activism appears to be rising at several large tech companies. Organized actions among technology employees in the U.S. almost tripled from 2018 to 2019 to more than 100, according to
public policy consultant Access Partnership Ltd. The activity continued into 2020 and, in Amazon's case, grew as the pandemic drew attention to the working conditions of essential employees.

A group of Google employees formed a union in January to speak out about the company without facing career repercussions, members said. Some employees at Twitter Inc. the same month collectively pushed for the socialmedia platform to suspend the account of then-President Donald Trump, while at Uber Technologies Inc., many drivers throughout the country have long sought employee status and benefits.

Amazon, unlike many other big tech firms, employs hundreds of thousands of hourly workers whose day-to-day jobs differ significantly from those of its white-collar engineers, finance and logistics professionals. The company, which made $386.1 billion in sales last year and saw its share price rise about 76%, hired more than 500,000 workers throughout the year to meet growing demand due to the pandemic.

Amid that growth, Amazon employees have pushed for improved working conditions during the pandemic, and some held walkouts in cities such as New York and Detroit. Amazon moved quickly to improve conditions and reduce worker absences that made on-time deliveries of essential goods more difficult.

The company beefed up supplies of protective equipment and cleaning at facilities and tested employees for Covid-19. It also temporarily raised pay and implemented social-distancing measures in warehouses.

Amazon disclosed late last year that more than 19,000 of its workers had tested positive for the coronavirus.

The company also granted vacation pay to all part-time workers-something warehouse employees across the country, including in Chicago, had been asking for since 2019.

Previously, outside pressure has also led Amazon to change its policies. The company in 2018 raised its minimum wage to $15 an hour after criticism from political figures over its hourly pay.

"Workers will continue to make demands of Amazon," said Rebecca Givan, a labor professor at Rutgers University. "Some will be union organizing drives, and some will take other forms."

Alongside the Alabama vote, formal efforts to organize are gathering steam. In Europe, where union representation is more common, Ama zon warehouse and delivery employees held a strike in Italy Monday to protest working conditions.

In Iowa, roughly 400 to 500 current and former Amazon workers connected to two of the company's warehouses there have been in contact with representatives from the International Brotherhood of Teamsters union, according to Randy Korgan, director for Amazon at the Teamsters.

Since the start of the pandemic, workers have communicated with the union more frequently and sought guidance about ways to organize, including with strikes, according to union officials. Workers are evaluating several possible campaigns.